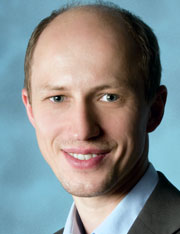 Robert Kawalko
co-founder and President of the Polish Fundraising
Association, Vice President of the European Fundraising Association, studied at universities in Krakow and in Fribourg in Switzerland. After 7 years in IT business, where he was responsible for the marketing and PR, he worked as a fundraiser for several non-profit organizations and since 2000 runs his own consulting and training enterprise.

When you speak about “non-governmental” organizations in Poland, many people don’t understand what you mean – they hardly imagine what it can be, as this term sounds very new for most of them.
It was only 21 years ago, in 1989, when Polish foundations and associations came back on stage breaking out the state’s monopoly in social activity and philanthropy. 5 decades of post-war period was a real catastrophe for the third sector: even biggest organizations with long traditions were dissolved by communists and only few of them had a license to exist. Citizens were taught that the government should control everything and heal all the pains. Apathy and duskiness of life soon became overwhelming. Only Catholic Church was to some extent a shelter of traditional communities where people helped each other.

When East-European nations restored their freedom, NPOs started to slowly change the landscape, but it took the Polish government whole 14 years before it defined “non-governmental organization” and gave it a place in legal acts and social policy. Local governments and autonomies are now obliged to cooperate with NPOs, but still few of them use their potential for public purposes – building common trust takes much more time at limited budgets and poor tradition of such relationships.

Now, when years passed since the burst of citizens’ initiative, 25% of Poland’s 38-million population are members of at least one NPO. Official register counts over 61 thousand of associations and 10 000 foundations. Besides them, there are next 50 000 organizations of trade-unions, firemen, religious communities and local grassroots organizations. If we treat all the above mentioned types as members of the “third sector”, we get over 120 thousand registered subjects. Only one third of them is older than 10 years and their potential is still at the development stage.

According to survey made in 2008 by Klon/Jawor Association, most non-governmental organizations in Poland work in the field of sports, tourism, recreation and hobby (38%), culture and art (13%), education and upbringing (13%), social service and social aid (11%), health protection (8%).
Two thirds of the organizations do not employ permanent, paid staff. The total number of employees in the organizations is 142 thousand persons, what gives about 72 000 full-time jobs. Economists say that the sector’s labor potential is several times bigger, but the boards are afraid to employ staff due to high taxes and popular conviction that paid work in NPOs is not acceptable and should be made by volunteers.

In half the organizations that employ paid staff, the average net wage did not exceed 1800 zlotys (ca 600 US dollars), what is visibly less than average salary in Poland, but only 30% of NPO employees complain about it, while majority accepts it or is satisfied.

Every second organization has its volunteers. The total number of volunteers contributing to the work of organizations in Poland can be estimated at about 7 million persons.

In 2005-2007 financial situation of NPOs visibly improved. In those three years average income of half of them reached the level of 6 000 US dollars, while in 2004 they had only $3 000 a year. At the same time, the richest organizations had more and more money – now 5% of them cumulates up to 80% of financial resources of all the sector, having budgets of $400 000 or more and the gaps between minors and majors are still growing. 10% of organizations have no income at all.

43% of NPOs’ budgets come from the government and local autonomies. Second biggest source of money are grants from the European Union, making 14% of the sector’s wealth.
Diversification of income sources is a visible weakness of the Polish NPOs. For instance, only less than 2% of them has an endowment and only 7% runs any forms of economic activity. Training, events, sales and publishing are among the most popular ones.

A average organization has three sources of finance, and they usually are: members’ contributions, grants from local autonomies and donations from business and individual donors. In 2004 the government introduced tax deduction giving – every tax payer can give 1% of his tax to an NPO. This possibility was not very popular in first 2-3 years, but now, thanks to big promotional campaigns and media, number of people using this form of support is increasing year by year, reaching 30% in 2009. Total annual value of 1% declarations reached half billion zlotys ($ 200 million) last year and some politicians make promises that they will increase the deduction to 2% in the future.

Fundraising – a planned and systematic way of searching for donors – is slowly becoming a recognized form of financing NPOs’ activity. However, it develops rather slowly, due to difficult financial situation of the organizations: 75% of them have no valuable fixed assets and over 9o% have no financial reserves. Therefore it is hard for NPO leaders to invest money in fundraising campaigns or even find resources to employ staff. Those who manage and take the risk, often try to reduce expenses and have to wait very long for some visible results.

●(4) good practices of fundraising as a team in Poland

When you ask anyone for an example of a fundraiser, most of people will easily name Jerzy Owsiak, Janina Ochojska or Anna Dymna – if you google out their names, you will get thousands of results. They are leaders of Polsih NPOs which made the grade in fundraising, working day by day and building relationships with millions of donors. Almost every Pole has made a donation for at least one of them. Mr. Owsiak runs an annual campaign named “The Great Orchestra of Christmas Charity” (www.wosp.org.pl) collecting money to improve public healthcare and beats new record every year. This year’s Grand Finale, a one-day street collection combined with TV auctions has brought over 12 million US dollars for children’s oncology equipment.
Janina Ochojska from the Polish Humanitarian Organization (www.pah.org.pl) has managed to extend the Polish philanthropy abroad and convinced the donors to support foreign missions in Africa, Asia and in regions of disasters. They build water wells in Sudan, run schools in Afghanistan, restore a hospital in Korea and feed children in poor regions, spending 10 million US dollars a year, raised by professional fundraisers.
Anna Dymna, a famous Polish actress, established her own foundation “Against the Odds” in 2004 (www.mimowszystko.org). After 6 years of a very intensive activity for disabled persons, it has become a leading organization in philanthropy in Poland, having a 4-person fundraising department and annual income of over 7 million US$. The speed of this development shows the power of professional management and fundraising methods. Having trust in thousands of its individual donors, the foundation became so bold in setting the goals, that they dared to start construction of 2 big treatment centers, and both of them are very advanced already.

Such successful cases are more and more frequent as the Polish Fundraising Association train more and more NPO leaders. So far, there have been 3500 of them across Poland. Last winter, one of the alumni, a nun from a small religious monastery in Wroclaw started an internet campaign to raise $10 000 for a renovation of a leaking roof in their house. She only opened a new website (cost of $25) and started sending emails with requests for donations. In less than one month she received three times more than she had expected and now the nuns show the results on pictures at http://znajdz30zlotych.pl/2010/04/oto-nasi-wspaniali-panowie-dekarze/

It will take at least e few more years until young civil society in Poland learns how to use the potential of NPOs. In terms of economy, non-governmental organizations cannot be compared with any other sector – it needs more managers, resources and autonomy. Now, the growth of the Polish non-profits is much facilitated with EU and public funds, but this money will be greatly reduced in a few years. This is the first challenge: to learn raising funds from other sources, independent from politics and government. Before start regular fundraising starts, a few stereotypes must be overcome: NPOs leaders should accept being employers, taking responsibility and thinking strategically, a few years ahead. Without it, they will miss a vision, they will be too often alone and burnt out.

Fortunately, many NPOs have made many steps on a path towards professional management and their example is a proof that it pays off. With fundraisers as ambassadors and promoters of NPOs missions, army of donors can make this effort much easier!